End of an Era (error)

I had the intention of writing this to criticize a decision I did not originally agree with. This decision was made by the summer camp who I owe everything in my life to. They decided to paint over the signing and artwork left by previous campers in the cabins. Some of these date back to the 1960’s.


Let me start at the beginning. I started going to the camp following third grade. It was rocky at first but as I got older I learned to love the place. I eventually volunteered there as a Special Needs Assistant (SNAP)  in high school which led me to my current occupation of Special Education teacher. I have a group of friends made during the many years attending music camp. Friends that I know if I called up would come help me if I needed it. So to me the walls of the cabins represented the memories of these weeks and summers of my past. With that I was appalled at the idea. I wanted my young son to see in the record of those walls the fun that his dad had once had there as well as those before him. I was hoping for a place that would have as a profound effect on him as it did me.

I set out on the day they were to begin painting to document these signatures and this artwork, to try to save it. I packed my son who is going to be two soon and we headed up. I met with a good friend who works there and he told me I had about an hour before the painting began.With my son in his carrier on my back I walked into the first cabin, North 2. This cabin I had stayed in twice as a camper in 1999 and 2001 and I had been a SNAP there many times. the memories came rushing like waves on the beach  as I walked in. There were late night whisper chats, as well as getting yelled at more than a couple times for talking after lights out. There were memories of pranks, farting contests (we were teenage boys) and one particular time where a friend of mine fixed the toilet. I remember singing to the girls in the other side of the cabin. Evenings sitting down by the lake just before bedtime. There were many an hour sitting on the front porch while the special needs campers slept. I particularly remembered the one time my toes got painted by my fellow SNAPs. This one was particularly funny because it was one toe a day so they were mismatched and the following week i was going on a beach vacation with my family, that made for an interesting week. I a wandered the cabin I found my name, as well as many friends’ names as well. My son who was chowing on a scone from the dining hall was just looking around, every now and then telling me he saw a tree outside the window. I photographed both sides of the cabin and moved on to North 3. I only stayed there once and, like before, I was hit by the memories the way the wind comes up and catches you off guard. As I found my name and got the pictures I wanted I packed up and head up to the dining hall and wait for the painting to begin. I felt I wanted to witness the deleting of my history, of the history of the camp itself. When I go to the top I flipped through some old pictures of the camp I was using for another project and set out to work on that one. It was when I got to the main lawn and looked over the lake that it hit me, it may be the end of an era, but it was my thinking that made me think this was an error. I was looking at this the wrong way. 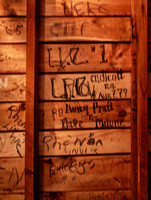 I had put so much emphasis on the idea of meticulously documenting my time there that I forgot my memories did not live in those walls but within me. I had more good times outside of them than in them. I was so focused on the physical representation of them I forgot that they were truly within me. I also realized that my son would go there and make his own memories. He would not have those memories because he would write them on the walls but because they would be written into his life story, just like me. He would benefit the same way I did from his experiences there. I also understood because the camp IS an ever evolving entity. Many of the buildings from the original camp are gone, but their message lives on. I am going to have to embrace the new in order to help the camp continue on with its message.


It was after this that I went back to the cabins to watch the youth group painting the walls. I could see that these kids were the current group of campers and they too, just like myself, were making their memories, even while painting of the material representation of the past ones.

As I write this now in my office with my beautiful wife and son asleep upstairs it has been nine years since I was a camper there, I look back and realize the camp was more than the buildings for.  It was the people. They were the ones who made it. They are the ones I will never forget. I hope that with these changes, although they may be hard for me, will bring new people to that magnificent place. With this I have to say I agree with the camps message:

With one final word to those of you who have crossed my path because of this wonderful place. First, thank you. Second I hope that you too can look back and remember that it was the people that made the place great, take those memories and cherish them and pass them on to the next generation. Always remember that in life it is the people who make the experiences and leave the lasting mark on you.